This was Christival 22 – a huge German youth event took place 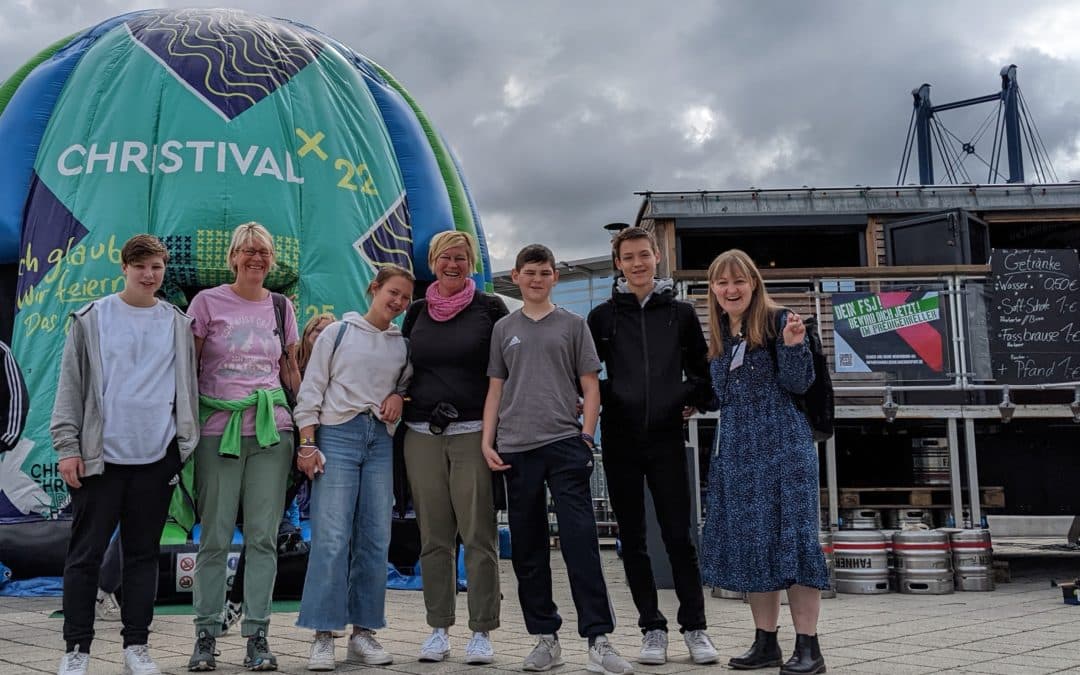 We have tasted and experienced the goodness and generousity of God!

The German festival called „Christival“ took place from 25-29 May 2022 in Erfurt, in the middle of Germany. This experience has been extraordinary, challenging to the core and provided us with a sense of God´s incredible kindness to the leadership team but even more to the thousands of young teenagers.

I have the privilege of serving on the board and a week before we were still really unsure how this is going to play out. But it did and more than that! It truly was a miracle!

After six years of planning, especially since 2019, we had hoped and dreamt, prayed and worked hard. We had made the decision not to postpone as it would collide with all the various youth festivals so we only had one way forward no matter what the options might be.

And we had to choose between only bad options. Will we do one festival in four locations? Do we need to keep groups together and have several Christivals? Or shorten the Christival and instead of doing one squeeze two into the one time-slot? All options were horrible and even more horrible. As a team we could just not fathom that it might turn out so differently then we had hoped for. So with full faith we went ahead, doubting and praying, debating scenarios and doubting.

When on Wednesday evening 13,000 young people with their 800 group leaders and staff entered the doors, quite a few of us could not hide our tears. That´s what we were made for!

Over the next few days they participated in many great offers and opportunities. As we served them, we as well as the staff and the exhibitors all expressed the meaningful engagements, the deep and honest conversations and the gratitude in the whole place.

Finally, still in the pandemic we could all meet and hug again. We could look into each other´s faces and engage maybe like never before. Before we were so doubtful if the young people would still be eager to meet, but they were and to the full. And they were eager meeting God as well. So many different commitments happened over these few days, so many God stories still pour in and youth leaders as well as parents express their thankfulness.

Together with a team I was co-responsible for a new space we offered in the afternoon, a space for young leaders.

As a team of six we had prepared for this for the last two years and created an impressive leadership parkour with booklet and app, a leadership resource corner, programme on a small stage having various speakers provide TED talk kind of input, mentoring and a chill area with free drinks. The same applied here, we had no clue who would come. Beforehand people could book the TED talk slots but somehow only 30 could. Would they turn up?

To our astonishment our 300m2 place was buzzing from the first to the last minute. We were flooded. The parcours was fully booked out, for the TED talks sometimes more than 80 came sitting on the floor and all over that someone had difficulties reaching the restrooms, the resources were taken and the mentoring slots were taken up. It was incredible!

And even better the team! In addition to us six people, we had another 15 people serving in various capacities and we became a wonderful family that event.

Our leadership parcours was so well received that we are now going the extra mile strategizing on how to offer this digitally. Prayers appreciated for this.

I was really praying and hoping that part of my family would also join me this Christival. The first nieces and nephews were old enough so I tried everything to persuade them. In the end, two sisters joined and one of them looked after the four nieces and nephews who came along while the other served in my space. Sometimes it was overwhelming for them but in general we had a fantastic time. In the final session, the youngest niece told my sister she wants to follow Jesus now. This was super exciting!

I had felt I could not put so much time into Christival and not bring young people with me.

I left this place after a week totally shuttered but extremely grateful. We had seen God at work more than we could have imagined.

To my surprise I also got asked last minute to help with the surveys for after the event and thanks to LeadNow in the person of Nancy we got the job done the day before the big evaluation meeting took place.

It was a real honour to be part of an event which has rewritten parts of history. May this event have long lasting implications on our young ones as well as on our youth work and churches.