AN IRRITATING PODCAST WHICH UTTERLY CHALLENGED ME 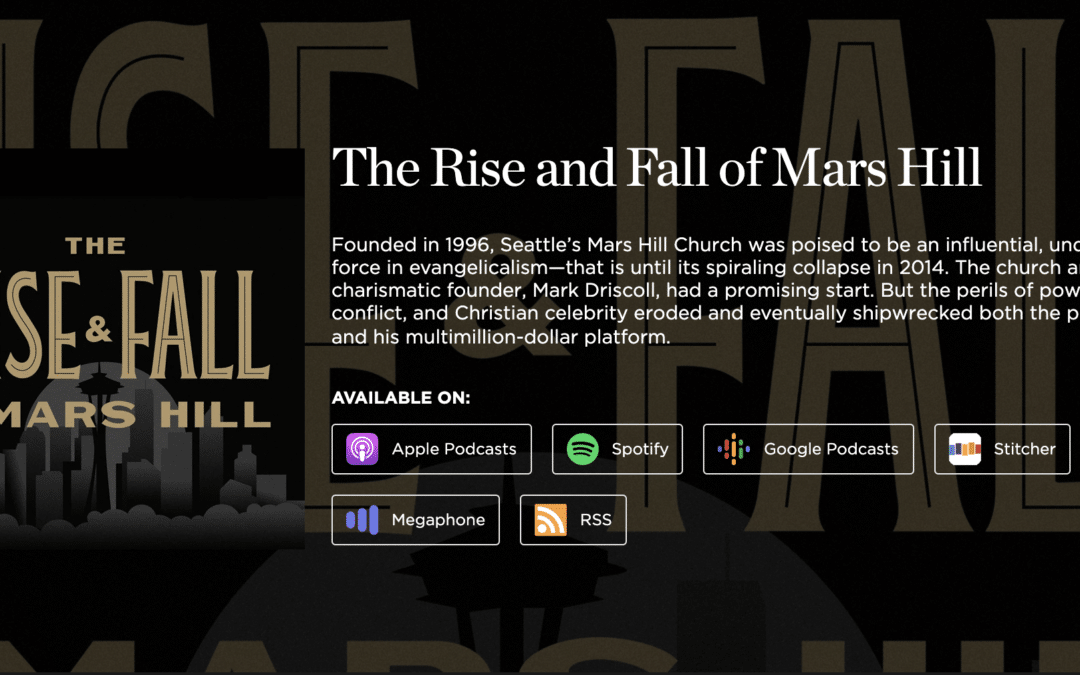 Over the past eight weeks I took the time to listen to all the episodes of this podcast by Christianity Today, “The Rise and Fall of Mars Hill Church”. I never thought I would be faced with such emotions listening to the various episodes. It got me so mad, angry, frustrated, upset and crying many times.

Christianity Today describes the content of this podcast so: “Founded in 1996, Seattle’s Mars Hill Church was poised to be an influential, undeniable force in evangelicalism—that is until its spiraling collapse in 2014. The church and its charismatic founder, Mark Driscoll, had a promising start. But the perils of power, conflict, and Christian celebrity eroded and eventually shipwrecked both the preacher and his multimillion-dollar platform.”

Apple podcast writes: “Hosted by Mike Cosper, this podcast takes you inside the story of Mars Hill Church in Seattle – from its founding as part of one of the largest church planting movements in American history to its very public dissolution—and the aftermath that followed. You’ll hear from people who lived this story, experiencing the triumphs and losses of Mars Hill, knowing it as both an amazing, life-transforming work of God and as a dangerous, abusive environment. The issues that plague Mars Hill and its founder, Mark Driscoll — dangers like money, celebrity, youth, scandal, and power—aren’t unique, and only by looking closely at what happened in Seattle will we be able to see ourselves.”

Listening to the abuse by this pastor and some of his co-pastors was nearly unbearable. The attitude towards women in so many cases horrendous. Listening to the weeping voices of men and women touched something deep in my heart. It also reminded me of some of the traumatic experiences I have had in leadership. Hearing these stories brought some of these stories back to life analysing the power imbalance behind many of them.

Of course each of us has his or her own story and some of the church stories have been traumatic also for you. It leaves me doubting how we have created such a celebrity culture and people can get away with evil things as long as the theology seems to be the right one. Why have people not stepped in earlier and listened to the voices of leaders who were kicked out by this pastor?

Though this podcast is heart wrenching, it also serves as a stirring tool and asks incredibly important questions like

Of course there is a subtle question about pointing fingers at others. I often find us Christians instead of applauding each other´s successes, they rather are happy about people´s failures because it makes us then look better. Yes, I was looking forward to the episodes while at the same time being appalled by them. I felt like looking the devil in the eye and saying, “grace and hope still abound”. This podcast raised some desperately needed questions for all of us in leadership. How do I want to lead? At the same time I worked on my own leadership manifest telling God, I want to glorify him in leadership and where I don´t, may he reveal this clearly to me. Over and over again.

And yes, there are also many ways I have messed up and needed to apologize, over and over. But I also have people in my life who correct and encourage me.

One of the things I have been praying for these past weeks and will continue praying so is: “Lord, please never make me famous”. I have promised myself before God once again not to use any means to advance myself.