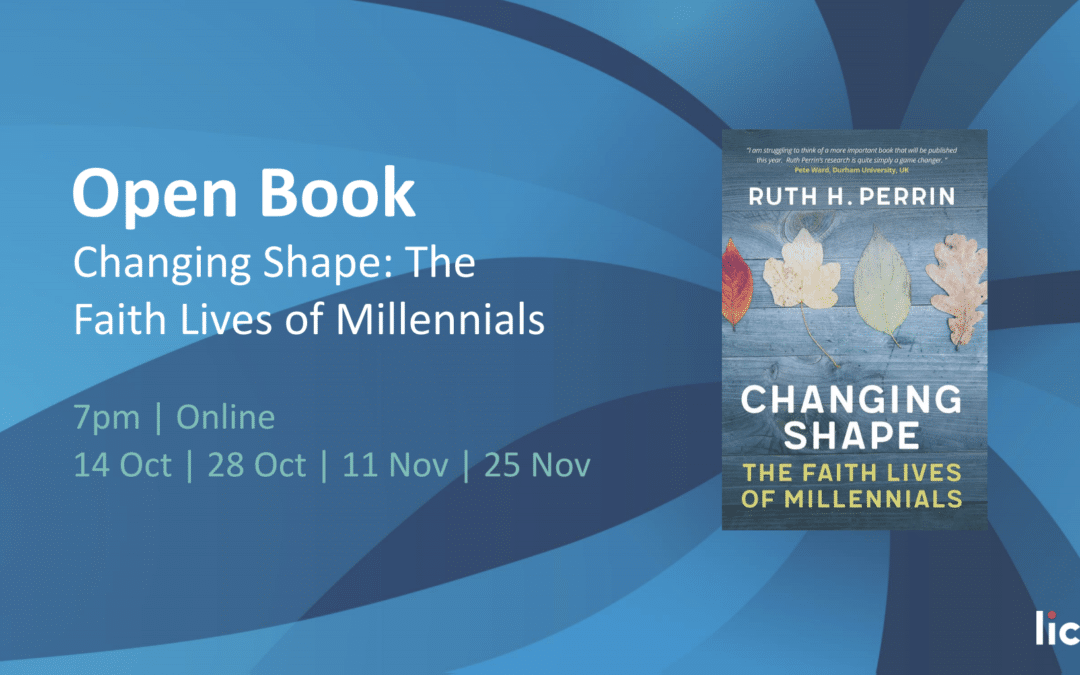 I took part in 4 book club sessions on the book by professor Ruth H. Perrin, “Changing shape – the faith lives of Millenials”.

I had anticipated to blog a summary after each book club but after the first one I decided to rather do one at the end of our reading.

Meanwhile I also had the chance to meet Ruth via Zoom and we will together offer a webinar in February 2021 for the Lausanne younger leaders. So next to reading her book it was absolutely a treat connecting with Ruth and getting to know her a bit more personally. What a legend she is.

But now back to the book! 🙂

Ruth, British, researches on the faith of active affirmers and what has helped them in their faith. She also interviews those who have left faith. In her book she used data gathered through qualitative interviews with 47 individuals aged 19-27 (Millennials) who had been active affirmers in their early twenties.

Of course, one can say that this is a small amount and the findings cannot be applied to all of the UK or even to Europe but this was not the intention here. It was asking “why?”

Looking at the UK scene, it has become an irreligious nation and it is estimated that merely 2-3% of those under 30 regularly attend church (p. x). Ruth explores what has happened to this “missing generation” within churches. Sara Savage described most British teens as “memory-less” when it comes to even the basic tenets of Christianity. The generational chain that had passed on religious knowledge had been broken, and broader institutions no longer reinforced that worldview (p. xi).

Most of these young ones are not hostile to religious faith. Half of them never had any contact at all with religion. It means, today you rather opt in rather than opt out of belief.

Fascinating is now the new interest of young ones exploring faith during Covid-19 and the rise of faith has made the headlines in Britain over the past few months.

And as leaders and churches we so need to understand the Millennials and their needs. Even the names given to them are enlightening: self-indulging narcissists, Generation Me with helicopter parents, Generation breakdown, altruistic individualists (p. 6).

Most young Millennials in the UK simply want a happy life, living the happy-midi narrative. Their core values are authenticity, tolerance and collaborative participation.

But as the world around us changes, life feels very uncertain to them. The world to them appears (p. 32) fundamentally unsafe, an unjust place and few have a coherent political, philosophical or religions framework within which to make sense of such events.

Many emerging adults appear not to have a single conversion experience that sets their religious belief in place permanently but instead faith development functions more like a spiral. Attending events next to their weekly Sunday engagement for the active affirmers has been life shaping. (great to know for my PhD research)

Ruth also found out that the churchgoing emerging adults tend to steer clear of potentially controversial subjects, using silence as a mechanism for non-confrontational disagreement (p. 65).

She also interviewed quite a few who lost their faith. “I do not call myself a Christian anymore”. These findings have been heart wrenching for Ruth and should also challenge us as leaders.

From the findings we find five recurring trends why young people do not longer want to be a Christian:

Most young people interviewed want faith community. They want authentic church where real life is shared and people are sincere about their joys, struggles, hopes and doubts (p. 202).

But what they find or experience is often not matched.

Interestingly, at a point of distress, some have returned to the religion experienced as a child and found it to be personally meaningful (p. 212).

Some patterns emerged from the narratives Ruth has witnessed when young people came back to faith or church. These participants could be described as being:

For the young adult, faith needs to be cognitively robust and experientially significant (p. 226). Having an experience, event or series of situations that they identified as divine intervention was central to their account. Faith has to be continually reframed. It needs to be intellectually coherent, emotionally truthful and socially supportive (p. 228).

When asked what they wanted church leaders to hear, some were saying, we want older leaders to help with integrating faith with the challenges of contemporary culture and differing life stages (p. 235). They do not want church to avoid topics, especially around being holistic disciples of Jesus. A number mentioned they want to be able to undertake theological journeys without being told off for exploring other forms of Christian spirituality (p. 237). We need the ability to discuss and disagree graciously. Faith has become complex as life does. Emerging adults are at a place where they are working this out and it can look messy, contradictory and doctrinally confused (p. 238).

For faith to flourish, four factors are pivotal:

As I engage with many Millennials in Europe and globally, I pray we are willing to listen to them and are committed to walk their journey with them.

If you are further interested, you simply have to buy the book! 🙂